A+ A-
Print Email
While u take ground level shot in early morning, the result is extra ordinary.
After so long time i was on birding on Sunday.its planned with my Sharpness expert frnd Dr.Vijayendra Desai.we met around at 6.45am n thought for many new species as winter started. but VD told that he must be return at 9.30am coz he have to attend election meeting.He told me that, you didn't clicked Brown Crake so we will go there for you.
After a drive of 5-6km we reached the point but not at destination.he told me to go on dusty road but road just enough for my car,if another vehicle come from other side then one must have to return in reverse gear.so we decided to park the car at road side and gone thru walking.
VD show me the sight where he had clicked the Brown Crake,but we didn't seen them so we moved ahead for clicking Red Munia and we still moved ahead. while i was clicking Red Munia, he told to click Brown Crake as they came on road. they were far away so we both walked lil n VD lying down on road n started crawling so i had also did same.after 10-15ft of crawling,one of Brown Crake go inside.i missed the shot but VD told me that they came again so be calm.after 2-3min of waiting one of Brown Crake came n took this amazing painting.
Brown Crake, or Brown Bush-hen, is a waterbird in the Rail and Crake family found in South Asia. Its genus name, Amaurornis, comes from the Greek amauros, meaning "dusky" or "brown" and ornis, meaning "bird".
all credit to VD. 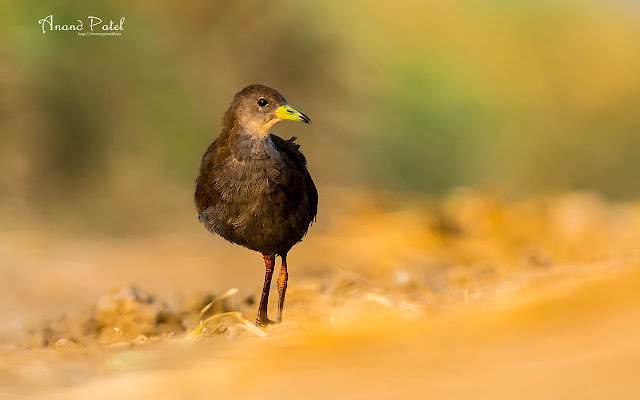