A+ A-
Print Email
We went again at Modhava Beach around at 3pm on 30/04/16 for frame Flamingos with Sunset.but our bad luck was there.The sun was playing hide n seek in the clouds n falmingos were also fly away so i was lil disappointed coz we went there for this moment n traveled aprx 700km n we lost moments.
But thanks to our friend Nirav Pomal who told us to frame crab known as Horn-eyed Ghost Crab, scientific name is Ocypode brevicornis.at first i had avoided to click but Nirav,Pankaj and Hiren were lying down on ground so i haven't choice to do other coz there were no birds.there were many crabs and we were very close to each other so myself moved at other side n clicked some good shots then seen big crab n moved at that side,lying down myself n very carefully crawl till better view for photo and video. 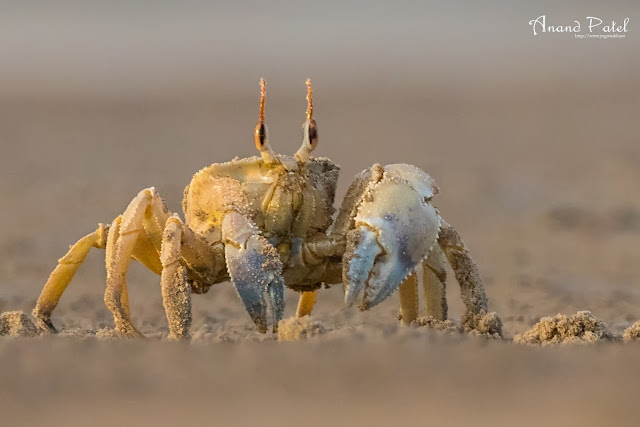 These are usually on sandy beach near or above the high water mark. It is said that when tunneling out their burrow, the crab carry sand to about 50-100 cm away from the burrow entrance, then toss the sand as far as it can. This behaviour probably explains the typical "spray" pattern of sand around the burrow. The burrow can be quite deep.

Body width 6-8cm. Body squarish box-like. Usually bluish grey with brown markings on the back, often in the shape of an "H". But a variety of other patterns also seen. Pincers long, downward pointing often with white or pale claws. Has a vertical ridge on the inside of the 'palm' that produces a rasping sound when rubbed against the rough surface of the face. This is probably done to declare their territory. Legs long with pointed tips. Large eyes on short stalks which can fold away into grooves on the body when the crab burrows into the sand. Adult crabs have a characteristic tall skinny point or 'horn' on top of each eye (called the stylophthalmous), usually darker in colour. The horn is shorter in females and absent in juveniles (2.5cm or smaller). A study found that juveniles can change their body colour and pattern to match the surrounding sand, usually becoming lighter during the day and darker at night.

Ghost crabs are well adapted for life out of water and are among the few marine creatures that roam the beaches at low tide, particularly at night. They run rapidly on the sand and can burrow quickly into wet sand. They can stay for a long time away from the sea because they can absorb water from the wet sand through special hairs on the base of their legs by capillary action.

Ghost crabs can really run fast! As suggested by their scientific name ("Ocy" means swift and "podi" foot in Greek). They literally fly over the sand and their movement has been described as a small leaf blowing over the sand surface. In fact, they may be among the fastest land creatures, moving at 100 bodylengths per second. In comparison, the cockroach does 50 bodylengths while the cheetah does a sluggish 10 bodylengths. Ghost crabs are only beaten by tiger beetles which do 171 body lengths when they are really scared. Being fast moving creatures, Ghost crabs have excellent eyesight to see where they are going. So, if a ghost crab was of comparable size, they’d be running at something close to 340 and 530 Km/h!
Same as Human they are also right n left hand sided mean if it have big claw on right hand side then it is a right handed.

They make small mountain to attract the female for mating,i was lucky to film the making of this mountain.they are Nature's Architect.