A+ A-
Print Email
in early days of my photography always i thought,Best Photo mean close up but it is one best.Birding in winter gives some of best and beautiful shots so i had planned to visit Nal Sarovar & Little Runn of Kutch in Feb'16.The date was confirmed by my birding friends Dr.Pragnesh & Viren and it was 6th Feb.so Pragnesh came with his Ciaz from Silvasa and we meet on Highway around at 3pm on 5th Feb. we reached our hotel near Viramgam,Ahmadabad around at 10pm.all credit to Dr.Pragnesh's Friend Shree Jaypalsinh Jadeja for instant kind help.
we have to reach Nal sarovar as early as possible n before sunrise so decided to sleep before 12am but time as passed in talks n discussion till 1.30am. Still Dr.Pragnesh wake up at 5am n myself at 5.15am.Around 5.30am my guide Akbarbhai call me to come at 6am but we are 40min late.
Finally we were at Nal sarovar aprox 7am.. The whole environment was change as Gujarat's Chief Minister Anandiben was coming for opening ceremony of Bird Festival in noon.Akbarbhai told us, he have to wait for some other work as he might have to go with Gujarat's Chief Minister so he had managed to send his brother Latifbhai.
Finally we were in the boat.we had clicked white-tailed lapwing,brown-headed gull,black-headed gull etc bird.it was around 8.45am and i was there for special species Common Starling and it was sighted till 10am so we were in hurry to go there.sudden i see a gull was flying near to us,as usual i forget to change the camera setting from manual to Aperture-priority coz it was flying and clicked but luckily got a best snap.it was a Heuglin's Gull. 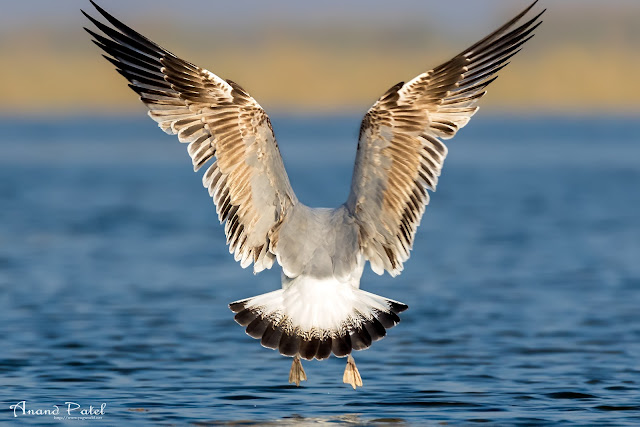