A+ A-
Print Email
it was a great pleasure to meet with birding friend and went for photography in night.after long time, approx after 1year i said yes to gone for photography in night so made a plan to meet on 13th April 2017 at Bardoli.
Before 13th April only Dharmesh Kadiwala(DK) and Hiren Joshi(HJ) was in as we sighted Oriental Scops Owl on 16/02/17 in Bardoli outskirt but Viren Desai is my close friend and i forced  him to come with us.Due to his busy schedule on 13th and 14th he refused to join. around at 2pm he called me to join but only if we went after 5.30pm and i said yes. we meet his home Bardoli at 5pm.
DK and HJ went in DK's Duster and We(myself,Viru and Abhay Naik) in my XUV 500.we were in 2 car just because of we also wanna do birding in Vansda National Park on 14th and DK was not doing Birding.
After drive of 2+hour mean  5.30pm to 7.45pm,we reached at DK's farm near to Vansda National Park.we get refreshed,checked n ready our equipment like camera setting, 3 external lights and we were in the DK's Duster then we did our Dinner till  9pm.
we were in search for Leopard,Hyna,Rusty-spotted Cat and jungle cat so we had explored south dang mountain area from ahwa to saputara but find only jungle cat till 11.50pm.in between we lost our road n decided to return n on the way.3 exteranl light were projecting on both side of car mean one was at HJ's hand,one was in Abhay's Hand and one was in my hand.sudden some big winged bird crossed the road and we stopped,focused light on it get wow feeling coz it was a Mottled Wood Owl.sudden picked camera n clicked 3-4 shot.owl was disturbed as at 1st we pour light on it (while we were searching) so it flew but not went far so we also moved little in car and took shots with steady hand coz our car was on and the most images which i took previously were soft.
here is one of them. 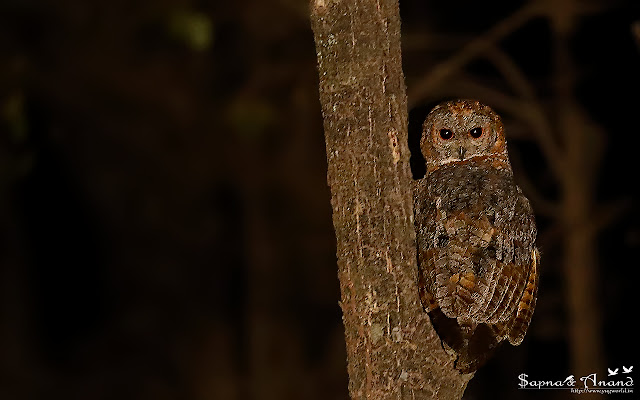