A+ A-
Print Email
it was 12/05/17 and i came from night shift and around 12pm i called my friend Hiren Joshi.i had told him some issue happened in Vansda Natinal Park in last week so we have to talk with RFO sir.Hiru replied me," doc currently where are you?", i told him, just came to Bilimora.then he asked me, he is free and he is at Anaval which is 20-30km away from Bilimora so we planned to go in noon to meet RFO Vansda National Park.
so i packed my camera,water then started drive at 2.30pn and reached Anaval at 3pm. Before we reach Vansda National Park, we stopped at one hotel coz we have to finalized that hotel for our event and discussed there till 4pm but still some issues remeain pending so i told,we should talk in evening after returning from Vansda National Park.
i had called RFO of Vansda National Park to meet and he give permission to meet in evening so we went at Vansda National Park but RFO sir was still in meeting Ahva.now what to do....so we both decided to enter in for birding,we paid fee and looking here n there for birds but nothing found till 1st watch tower.
while we reach 1st watch tower,Hiru show a Antelope n i saw a pair of junglefowl now we both confused...what to frame.i had decided to focus Antelope and Hiru decided to focus junglefowl but we both failed to frame it.Then we moved ahead in my cheetah and sudden we both saw some big bird close to road. i drive at a speed of 5-10km/h and we both tried to focus but failed then i reverse the car then focus n much excited coz it's a Crested Hawk Eagle.
Hiren asked to drive little ahead of it and opened sunroof,Hiren was looking from sunroof to set a angle and at a point he told to stop and we both clicked 5-10shots.then he fly just above us and went other side of road.same thing we did and clicked so many photos of it n a video.
here is best shot from them. 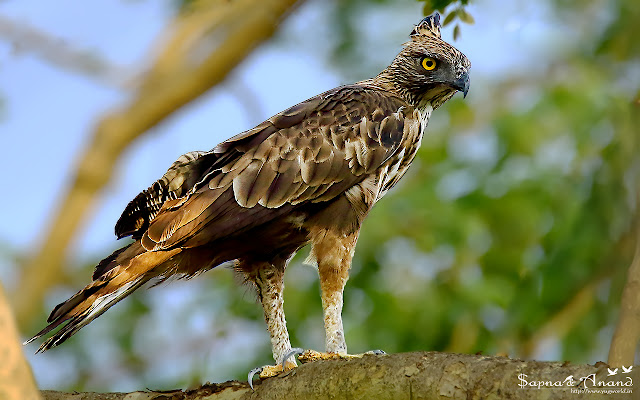