A+ A-
Print Email
Blackbuck National Park,Velavadar is a large grassland in gujarat where Harrier  do rousting.it is the heaven for Harrier lovers.Except Pied Harrier,all Harriers came there between August to March for wintering.They roost on ground and hunts locusts,snakes,lizard,small rodents and birds which help as biological pest control to farm crops,maintains the Eco-system of grassland.mostly i go during 2nd week of October and i was there with my friends on 20/10/16.
The long story line posted in Indian Grey Wolf and we reached there in midnight of 20/10/16.we entered park with guide Sikandar and clicked Montagu's Harrier, Blackbuck,European Roller and Woolly-necked Stork till 7.30am.we were near a wetland and stopped for waders and clicked 2 shots of this stint.didn't processed as i have click but i was just exploring this folder and seen this image,it has a clear mirror reflection so cudn't stop myself to do post processing it.and here is the result. 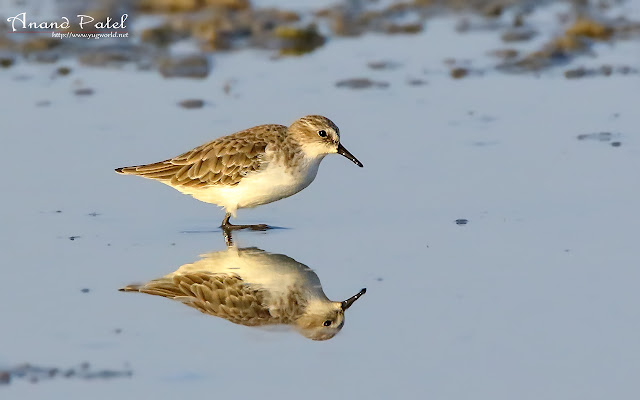