A+ A-
Print Email
Since Long time,i has a dram to frame Lion on a Railway track and thought to fulfill this wish During my Sasan Trip in May 2017.Mostly it depends on luck coz lion mostly not cross its territory or if they try to do,their tracker not to do them.
we Started our Morning safari at its time and searching birds as well as leopard and lion.it was lil foggy morning and we sighted Spotted owlet,Tickell's blue Flycatcher,Yellow-crowned Woodpecker.Then we moved inside and clicked Male Spotted Deer and later Sambar Deer. while we moved further inside on our root,we sighted groups of Sub Adult Lion and Liones,clicked some shots and moved towards railway line for my desire shot.Before we reach ther,i sighted Jungle Nightjar and clicked good shots.
After giving 2min,we rushed at railway crossing and dont know what our sixth sense worked but one of gypsy covered whole road and we missed my dream shot.so we forced our gypsy driver to drive and that narrow minded driver,driven his gypsy lil aside.while we reach over track,Lion crossed and walking beside the track.i missed shot.most worst thing was in that gypsy,no one had camera... 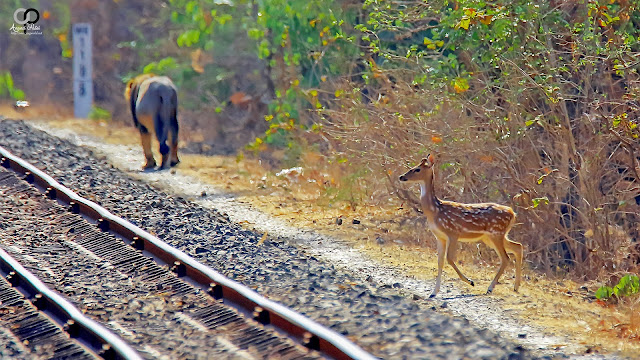