A+ A-
Print Email
Indian Skimmer is in my wishlist since 3years but cudn't get chance to frame it.As it is sighted in Gujarat during August to October at Nal Sarovar and Jamnagar.Jamnagar is 800km away from my city and Nal Sarovar is 400km away so whenever got news of confirm sighting of Indian Skimmer,i tried but didn't succeed.
Got call from Akbar(+91 99988 01633) on 15/08/18 that sir come Nal Sarovar for skimmers(10-15) were arrived so made a plan with my birding buddies to go on night of 16th and birding on 17th. all set.Dr.Pragnesh is coming from Silvasa with Saswat Mishra and they meet n pick Viren Desai n Hiren Joshi around at 7pm on national Highway then they came to my home by 7.45pm,parked Pragnesh's Ciaz and went to Nal Sarovar in my XUV500 due to heavy traffic near Kosamba on National Highway due to making of fly over.
everything on track as per plan and we took our dinner break at Bharuch around at 9.30pm and then on the way towards our destination.Think to reach by 1.30am but we reach at 2.15am and parked my cheetah then sleep in car.
5.45am got call frm Dr.Pankaj and told how about rain there,i was shocked and told why?!.Pankaj told that there is showering in Ahmadabad,i told told there is not a drop came till now and Pankaj also on the way towards Nal Sarovar.
Little bluish Tone came over sky and we can easily see the clouds and showering started at 7am.within 10-15min all Nal Sarovar guide gathered at ticket counter and many of them came towards us but all cross us except Akbar as they knew that we always go with Akbar.i told for tea and we went outside of office area and Akbar asked for tea.we were drinking Tea and Pankaj came there.
we have to wait for good light and stopping of showering but around at 8.30am,rain started and again after 30min its heavy rain.we took selfie and started gossip coz we have no other option.we all were looking weather forecast and waiting for stopping of rain.
Around 10.30am,we had decided to go back to our home and Pankaj went in his car then we also.after drive of 100-200mtr, we stopped and did photography of Painted Snipe,Yellow Bittern etc.Sudden got a Call frm Pankaj and he told that,rain is stopped at Sanand so how about there,i told,it still but lees than previous so Pankaj told to ask Akbar to arrange umbrella and try for skimmers as we were came from 400km so i replied for yes.when i was dialing a number of akbar,i saw him beside my car and told about umbrella and he replied yes for it.
So we were again on mission of skimmer.Akbar has only 2 umbrella so at 1st round Viren,Pragnesh and Saswat went then myself and Hiren went.i was so amazed to see skimmer 1st time. 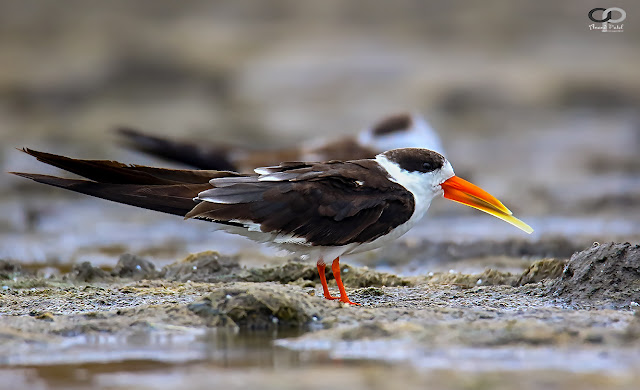