A+ A-
Print Email

The History of Camera can be start from ancient time as the Greek philosopher Aristotle (384 to 322 BCE) understood the optical principle of the pinhole camera and then later it be used for drawing and study purpose. 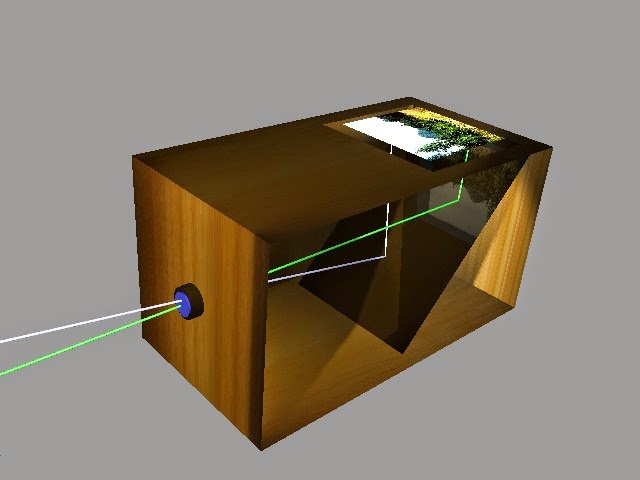 source : Camera obscura
Aprx in 1816 the first fixed Photograph was made by Nicéphore Niépce  in 1826, he used a sliding wooden box camera made by Charles and Vincent Chevalier in Paris, France, soon effaced by further experiments with bitumen and exposing the plate in this camera. 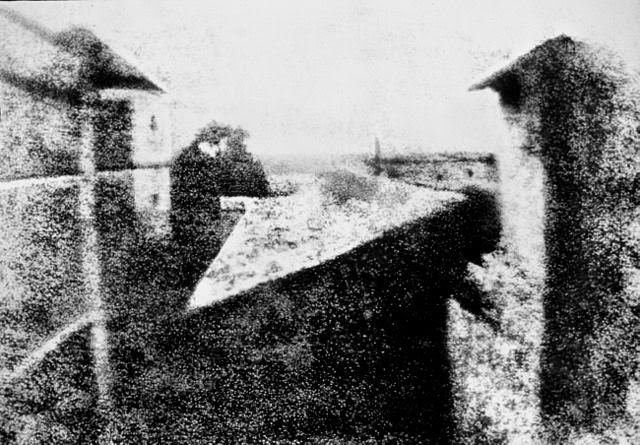 source
The first photographic camera developed for commercial manufacture was a daguerreotype camera, built by Alphonse Giroux. Giroux signed a contract with Daguerre and Isidore Niépce to produce the cameras in France,which each device and accessories costing 400 francs. The camera was a double-box design, with a landscape lens fitted to the outer box, and a holder for a ground glass focusing screen and image plate on the inner box. By sliding the inner box, objects at various distances could be brought to as sharp a focus as desired. 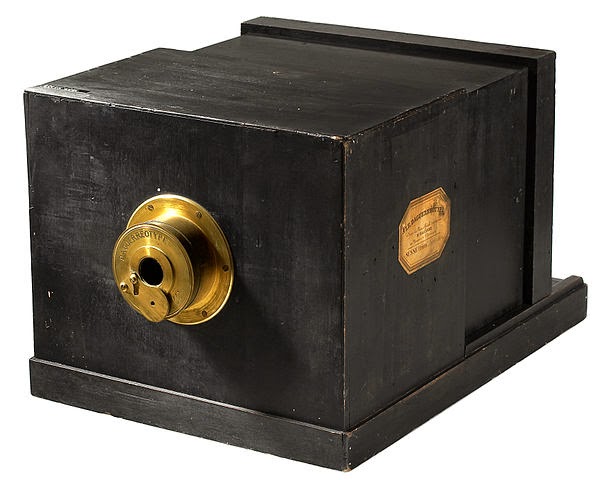 The early daguerreotype cameras required long exposure times, which in 1839 could be from 5 to 30 minutes

Collodion dry plates had been available since 1855, thanks to the work of Désiré van Monckhoven, but it was not until the invention of the gelatin dry plate in 1871 by Richard Leach Maddox that they rivaled wet plates in speed and quality. Also, for the first time, cameras could be made small enough to be hand-held, or even concealed. 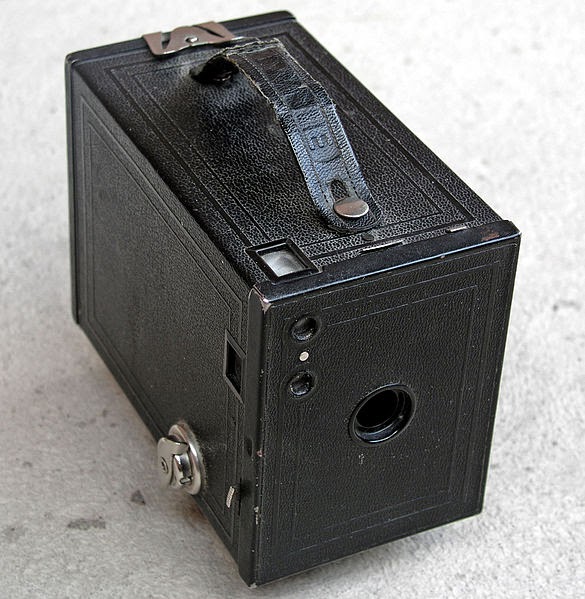 The use of photographic film was pioneered by George Eastman, who started manufacturing paper film in 1885 before switching to celluloid in 1889. His first camera, which he called the "Kodak," was first offered for sale in 1888. It was a very simple box camera with a fixed-focus lens and single shutter speed, which along with its relatively low price appealed to the average consumer. The Kodak came pre-loaded with enough film for 100 exposures and needed to be sent back to the factory for processing and reloading when the roll was finished. By the end of the 19th century Eastman had expanded his lineup to several models including both box and folding cameras.
In 1900, Eastman took mass-market photography one step further with the Brownie, a simple and very inexpensive box camera that introduced the concept of the snapshot. The Brownie was extremely popular and various models remained on sale until the 1960s.
Film also allowed the movie camera to develop from an expensive toy to a practical commercial tool.
Despite the advances in low-cost photography made possible by Eastman, plate cameras still offered higher-quality prints and remained popular well into the 20th century. To compete with rollfilm cameras, which offered a larger number of exposures per loading, many inexpensive plate cameras from this era were equipped with magazines to hold several plates at once. Special backs for plate cameras allowing them to use film packs or rollfilm were also available, as were backs that enabled rollfilm cameras to use plates.
Except for a few special types such as Schmidt cameras, most professional astrographs continued to use plates until the end of the 20th century when electronic photography replaced them.

Oskar Barnack, who was in charge of research and development at Leitz, decided to investigate using 35 mm cine film for still cameras while attempting to build a compact camera capable of making high-quality enlargements. He built his prototype 35 mm camera (Ur-Leica) around 1913, though further development was delayed for several years by World War I. Leitz test-marketed the design between 1923 and 1924, receiving enough positive feedback that the camera was put into production as the 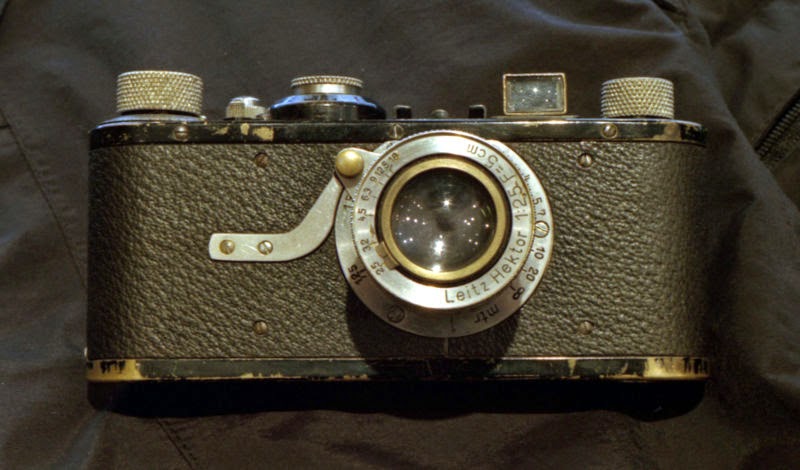 Leica I (for Leitz camera) in 1925. The Leica's immediate popularity spawned a number of competitors, most notably the Contax (introduced in 1932), and cemented the position of 35 mm as the format of choice for high-end compact cameras.
Kodak got into the market with the 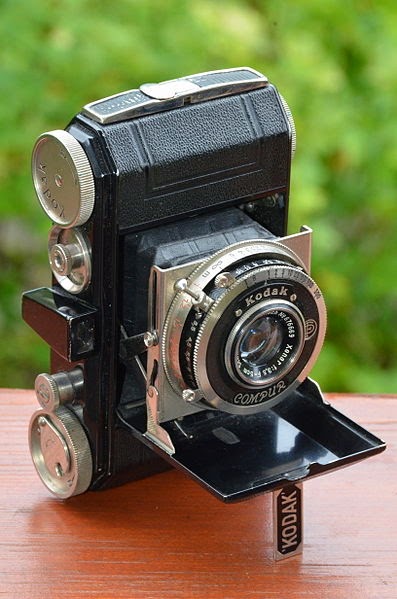 Retina I in 1934, which introduced the 135 cartridge used in all modern 35 mm cameras. Although the Retina was comparatively inexpensive, 35 mm cameras were still out of reach for most people and rollfilm remained the format of choice for mass-market cameras. This changed in 1936 with the introduction of the inexpensive Argus A and to an even greater extent in 1939 with the arrival of the immensely popular 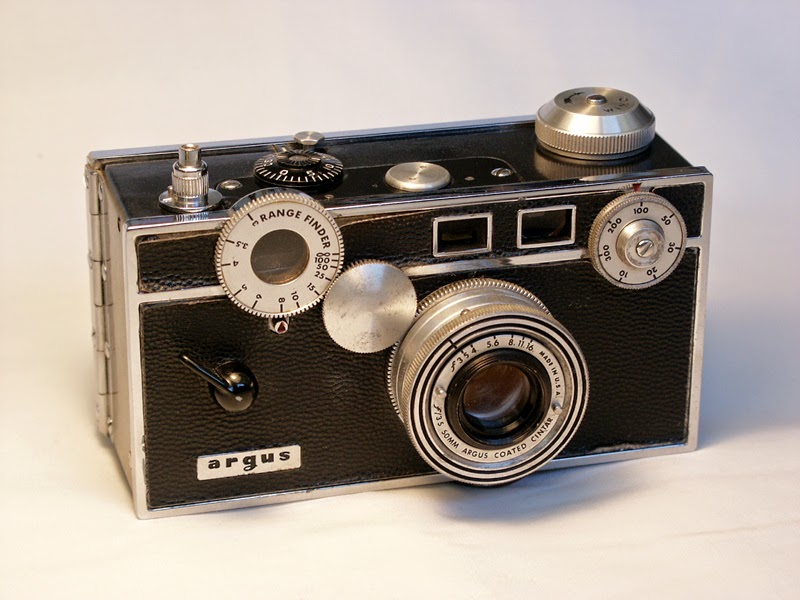 Argus C3. Although the cheapest cameras still used rollfilm, 35 mm film had come to dominate the market by the time the C3 was discontinued in 1966.
The fledgling Japanese camera industry began to take off in 1936 with the Canon 35 mm rangefinder, an improved version of the 1933 Kwanon prototype. Japanese cameras would begin to become popular in the West after Korean War veterans and soldiers stationed in Japan brought them back to the United States and elsewhere

The first practical reflex camera was the Franke & Heidecke Rolleiflex medium format TLR of 1928. Though both single- and twin-lens reflex cameras had been available for decades, they were too bulky to achieve much popularity. The Rolleiflex, however, was sufficiently compact to achieve widespread popularity and the medium-format TLR design became popular for both high- and low-end cameras.
A similar revolution in SLR design began in 1933 with the introduction of the Ihagee Exakta, a compact SLR which used 127 rollfilm. This was followed three years later by the first Western SLR to use 35mm film, the Kine Exakta (World's first true 35mm SLR was Soviet "Sport" camera, marketed several months before Kine Exakta, though "Sport" used its own film cartridge). The 35mm SLR design gained immediate popularity and there was an explosion of new models and innovative features after World War II. There were also a few 35mm TLRs, the best-known of which was the Contaflex of 1935, but for the most part these met with little success. 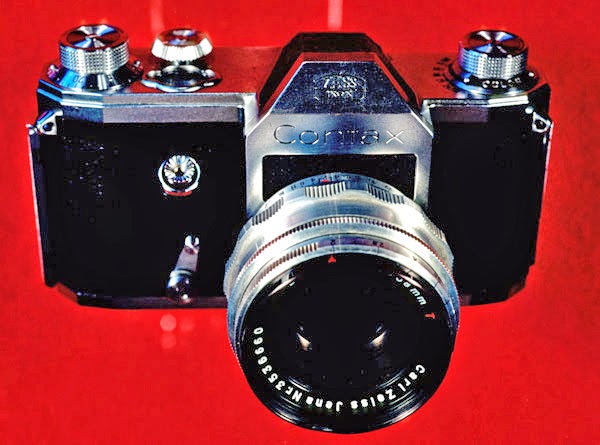 A historic camera: the Contax S of 1949 — the first pentaprism SLR

The first major post-war SLR innovation was the eye-level viewfinder, which first appeared on the Hungarian Duflex in 1947 and was refined in 1948 with the Contax S, the first camera to use a pentaprism. Prior to this, all SLRs were equipped with waist-level focusing screens. The Duflex was also the first SLR with an instant-return mirror, which prevented the viewfinder from being blacked out after each exposure. This same time period also saw the introduction of the Hasselblad 1600F, which set the standard for medium format SLRs for decades. 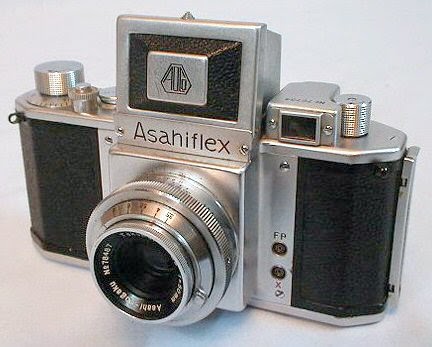 Several other Japanese camera makers also entered the SLR market in the 1950s, including Canon, Yashica, and Nikon. 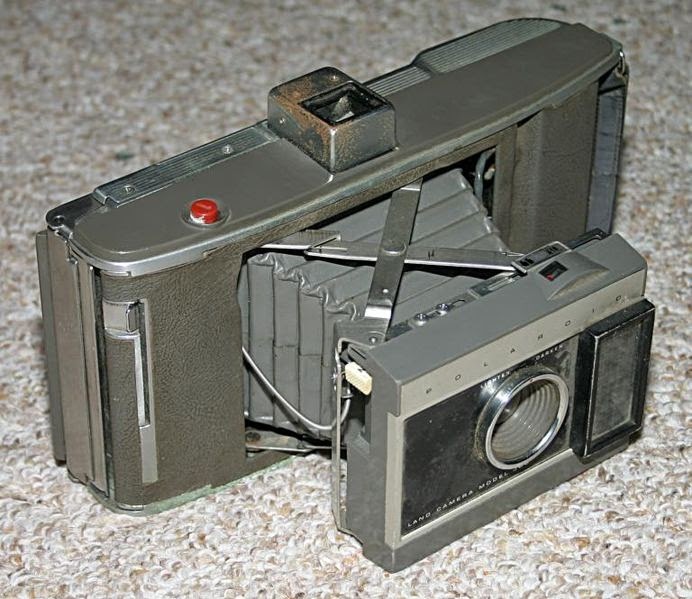 While conventional cameras were becoming more refined and sophisticated, an entirely new type of camera appeared on the market in 1948. This was the Polaroid Model 95, the world's first viable instant-picture camera. Known as a Land Camera after its inventor, Edwin Land, the Model 95 used a patented chemical process to produce finished positive prints from the exposed negatives in under a minute. The Land Camera caught on despite its relatively high price and the Polaroid lineup had expanded to dozens of models by the 1960s. The first Polaroid camera aimed at the popular market, the Model 20 Swinger of 1965, was a huge success and remains one of the top-selling cameras of all time.

The first camera to feature automatic exposure was the selenium light meter-equipped, fully automatic Super Kodak Six-20 pack of 1938, but its extremely high price (for the time) of $225 (3770 in present terms) kept it from achieving any degree of success. By the 1960s, however, low-cost electronic components were commonplace and cameras equipped with light meters and automatic exposure systems became increasingly widespread.
The next technological advance came in 1960, when the German Mec 16 SB subminiature became the first camera to place the light meter behind the lens for more accurate metering. However, through-the-lens metering ultimately became a feature more commonly found on SLRs than other types of camera; the first SLR equipped with a TTL system was the Topcon RE Super of 1962.


see this full infographics on Revolution of Cameras

Some yearly Facts by Mary Bellis