A+ A-
Print Email
Due to Social reason on 18/08/15 i was at Damaniya hospital, Gandevi around at 8pm. i called my friend, Dr.Dharmeshbhai who is a pediatrician.luckily he was there n we had talked on camera body n monsoon bird near by Bilimora. so decided to went coastal highway of Bilimora to Valsad around at 6.30am.
As usual i wake up late n msg Dr.Dharmeshbhai around at 6.45 but he didn't read(as he replied around 9am that he didn't wake up early due to night call from hospial).so i went alone.
i just entered in dandi n seen two Blue-tailed bee-eaters as Dr.Dharmeshbhai told me. Blue-tailed Bee-eater were found in winter in this coastal highway side area. sudden so stopped my car n focused on it.i was so excited when i clicked both Blue-tailed Bee-eater in single frame. 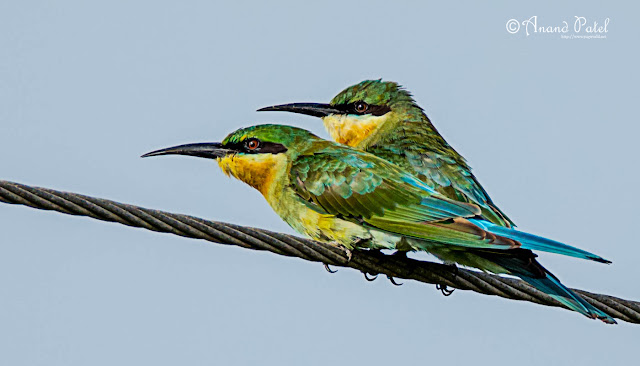