A+ A-
Print Email
its a Critically Endangered Species so i will not write a full story as i always mentioned the location n how to reach there so sorry for no full story for this species(removed locations).
The number of Great Indian Bustard in Gujarat is just 6.(?)

Credit of this species to my best friend Viren Desai as he had sighted from far. we tried to approach little nearer without disturbing but it fly away even we were much away then we had heard that 1-2 person had disturbed them for good shot.

A cold of around 10degree C of early morning and we wake up around at 5am coz we have to drive 100+km after knocking of our room by our guide.after getting fresh we take tea and around 5.30am we were on the way to for GIB.
after left our rooms in grk,we lost in the grk as much dark and road is all side.we roam here n there for 15+min lol.even gps was not working.finally we came on road around at 5.50am.
Still i was driving speed of 40kmph coz there are so many nightjar and they mostly came on road.we have to reach before sunrise but we were late.even we went on wrong way as missed the google's map voice or didn't give voice msg. so we turn on map on tomtom map (paid app) in iphone7 and we reached our destination around at 7.25am.
our guide came there within 5min and we were on the way to search GIB.our guide searched it with binocular...here n there but he failed so moved to another location.we reached at one point where a tree was superbly set with sunrise and clicked a beautiful frame.will share it later.
again we moved at another area.we were roaming places to places and time was passing.we have to leave this area at 10am as we have to go for spotted sandgrouse and it was 150+km away.
and sudden my frnd Viren Desai sighted this beauty.
we had clicked 1-2 shots of peek-a-boo then moved little and got open shots.but as mentioned it was afraid and started flying.we sighted 3. 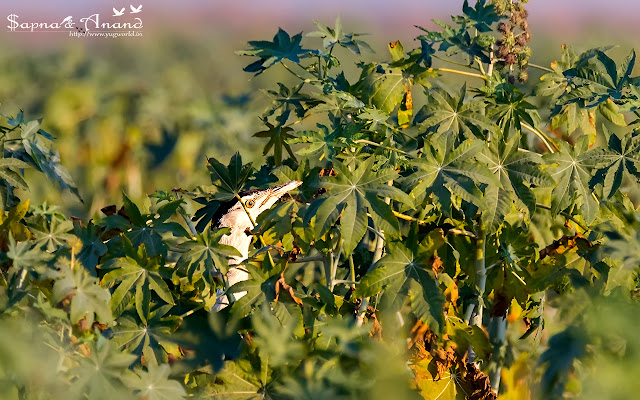