A+ A-
Print Email
Got News frm frnds group of birds came after 19yrs in kutch and he shared photograph with our whatsapp grp and then uploaded to http://birdsofgujarat.co.in so wishlist added in mind but it was aprx 700km away from my home and plan was made...failed since 1+mnth.
finally we was there as mentioned in indian Nightjar. My friend Gani Khatri  had tried for sighting for 2 days for us but failed,even no one was ready to share location.so i was little depressed for sighting.even i was not in contact with Bharat Kapdi before we meet.on 14th i told my guide mahamadbhi (father of Mukim).
After dinner mahmadbhai met me and told that he had talk with Bharatbhai for Spotted Sandgrouse and gave number.i called Bhartbhai for confimation and set a trip.we have to reach aprx at 2.30pm so we had finished our successful trip of Great indian Bustard  and reached on time at Epicenter Homestay Lodayi village, Bharat Kapdi, owner of Epicenter Homestay
told us that he was the 1st to sight the Spotted Sandgrouse on 15th November.even he told us that in 1997 who had sighted these Sandgrouse.Bharatbhai made a tea for us and we talked regarding his birding center.he told us that why he named Epicenter homestay. on 26th January 2001,when earthquake was came the blast was just 1km away from this location on little mount.
Around 3.15pm He told us to go for Spotted Sandgrouse.after drive of 5+km,we entered a dried grassland without grass.he told me to blow horn 2-3times as he always do.later he told that this area is our goddess and whenever i enter, i do like this,we appreciate for his pray to this area.within 1-2km of drive we sighted 3-4 Spotted Sandgrouse and took record shot from distance and tried to go closure but it fly away.then we moved inside.
after drive of 2km my frrnd Pragnesh sighted a bird from far away and told its like a falcon.we focused and i told it laggar falcon.we carefully approached and clicked it but id was difficult....this story will share later.
i think we had spent a hour for this falcon and then we moved ahead for sighting of Spotted Sandgrouse but before we went inside, Bharatbhai sighted Cream-coloured Courser and clicked some good shots.
i think its 4.45pm and we have just 45min and have to go further 5-10km.so again i drive on a speed of 100+km/h speed and reached a location where Bharatbhai told me to slow down for 1km then we stop.he picked Binocular and told to drive as he asked.but these group too fly away.he told us that these Spotted Sandgrouse are disturbed by some photographers so they are flying away.
we follow them and again we tried to go near and around 5.25pm we clicked this shot from distance.then they again fly away.now we have to return as we were 15-20km away from village and if we lost the way,no one can contact us there was no network. 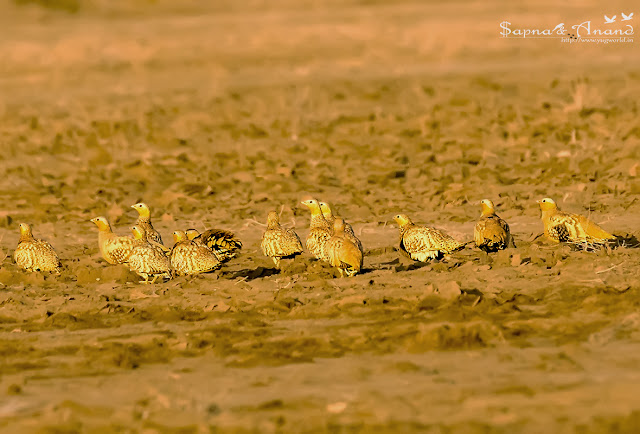