A+ A-
Print Email
27th November was lucky day for me coz i had clicked 9th out of 10 woodpecker sighted in Gujarat and Total Birds clicked only in Gujarat reached 305.plan was made and changed time to time and finally i was entered in Vansda National Park around at 8am with Virenbhai,Pragnesh and Yogesh.
After entering more inside the park by driving my cheetah, i thought many are right...not to go at Vansda National Park till December end coz it was totally green in all side, sunlight was hardly coming down, trees are much taller and 6-7 leopards were sighted there.
Till 11.45am we had sighted Jungle owlet, puff-throated babbler, Indian paradise flycatcher and other bird due to extreme low light shots were not upto my marks. then we were thought to in another trap but due to heavy rain during monsoon, road was washed n broken so we parked  at one point and walked nearby.sudden i hear a sound of heart-spotted woodpecker and we clicked more then 50shots with different different angle and light.while we were clicking it,we hear a dog like barking sound and many monkeys were jumping one to another tree and i thought for leopard so we hurriedly walked towards my car.
After 5min all sounds were clear,we find nothing so thought to go inside further.this time Viren was not feeling well so he sit in car. myself and Pragnesh went again there.Pragnesh told that here he had clicked many flycatchers n sudden i hear a sound of White-bellied Woodpecker and spotted but it was far away even we clicked record shot as i had visited Vansda National Park 4-5 times but i was not lucky to click this beauty.after record shot very carefully we approached for good shot with hiding ourself behind the tree but we noticed and it fly away.
i thought for bad luck as clicked shots but all shows half body of it.after 30min again it come back from different side but now at on other tree.it was now in low light but i was lucky to click full body shot. 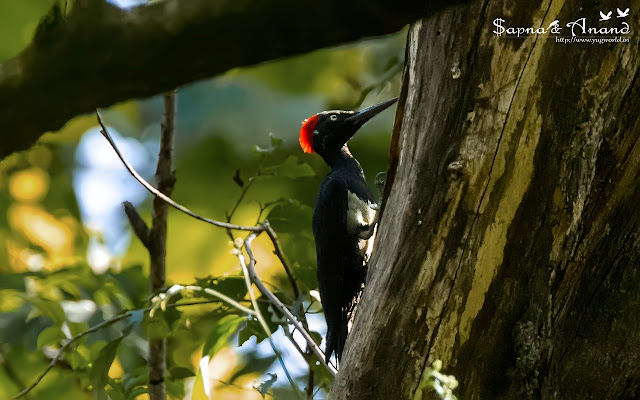