A+ A-
Print Email
Cold morning of 2nd December'16 and i had skipped planned to go for photography in early morning. So i wake up around at 9am and after getting fresh,i was taking my breakfast with tea.Sudden my phone ring and call was of from my close friend Viren desai.He told me" Doctor, any place to go nearby Surat for 2 hours as i was in surat for some work and have to return at 12pm"....i replied..one only Tena wetland.he replied,get ready, i am coming to your home.
He came withing 20min and we were at our Spot around at 10.30am. i was shocked coz some of small trees were cut,which were on a bank of wetland so difficult to hide ourselves.even we were late so sunlight was little harsh even though its winter.As my thought all ducks were far away so we had decided to walked on road beside wetland to find newer but nothing find.
We had decided to return at 11.50am and were walking towards Viru's Elntra. sudden i saw a Marsh Harrier was on hunt and ducks were running-flying for life,i told Viru to seat nearby with ready focus.as i thought,the duck will come nearer to us and if harrier will come again for hunt,we will shot beautiful frame of running ducks.
we got 3-4 chance from long distance and clicked 15+ shots.here is best shot from one of them. 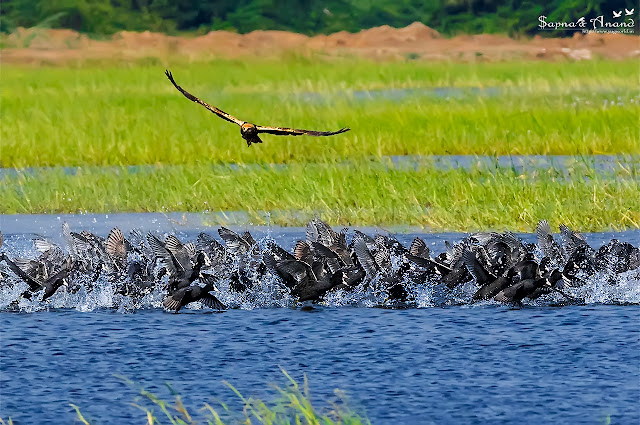