A+ A-
Print Email
Me and my close friends went so many places in Gujarat and don't know why many people are telling indirectly that, we are running for bird count.yes we run behind every new species,its not for us but its for Gujarat coz in past there were on paper record but no one have photos of all species, our moto is to make large photographic bird database for birds sighted only in Gujarat and nearby Union Territory in Gujarat.
i had seen Brown Fish Owl in our website http://www.birdsofgujarat.co.in/ , uploaded by Dr.Gaurang Bagda, who is a Physician and tried to contact him on Facebook but his friend list was 5k so i cant send fb request.(even i too reached at this 5k fb friend list but realize that many had sent fb request to obtain "likes" so now removing them and reache at 2.2k...lol)
we had made a trip to Sasan Gir wildlife sanctuary for birds and lion.one day i messaged in my group for wish list birds and one of my friend Abhay wrote for "Brown Fish Owl".so i replied, i will try for you.
Again i tried to sent FB Request to Dr.Gaurang and luckily it sent....then he accepted it.while i got message of it,i sent a long message for "Brown Fish Owl" as he know me coz me and Pankaj had uploaded many birds of his as he is much busy person.so he replied that he will try to fulfill our wish list.i called Pankaj and told that talk with Dr.Gaurang regarding Brown Fish Owl as he told.
Pankaj talked with Dr.Gaurang and asked to come aprx at 3pm so we can find this beauty.now we have to plan for reach timely at Junagadh around at 3pm.so made a plan to drive from Surat around at 5am and reach at ahmedabad at 10am then we reach junagadh at 3pm,and everyone was ready.
On 3/5/17 i came from night shift and think for good sleep on 4/5/17 but dont know what happened,didnt took a sleep of 1minut so at 1am,i wrote a message in our whatsapp group for sasan trip...come as early... Abhay was also awake so told to go at Viren's home to start journey early as they had decided to drive at 3.30am.Abhay went at Viru's Home and Viru was also waiting of Abhay and Hiren.Viru called Hiren and surprisingly, Hiren was also awake we all were like owl,might be due to excitement of our trip.
They went to DK(Dharmesh kadiwal)'s home to pick him and 4.30am at my home.we were on the way to Ahmedabad to pick Pankaj.we reached at 9.45 am and Pankaj came at Ringroad of ahmedbad,now e were on the way to Junagadh.we had took our lunch at limdi and started our journey again.due to traffic we reach junagadh at 3.30am.Gaurangbhai wa waiting for us at entrance of sanctuary since 3pm and we reached at 4pm,we all met him face to face 1st time then we were on the way to hill for "Brown Fish Owl".
As Gaurangbhai knew the place,we parked the car after drive of 20min and now we have to walk aprx 1+km in between small to large stones with careful walk.temperature was about 42+c and humidity was high so everyone were soaked in perspiration was it was for wish list so we all ignored(except Pankaj and Gaurangbhai have clicks)
After walking of 20+min Gaurangbhai told us to walk very carefully as we were in the area of "Brown Fish Owl" but our bad luck,it was not there so we walk ahead for 200+mtr and it fly away.now we had divided in group of 3 and walk for 300+mtr but we unable to locate this beauty.Abhay was with me and we see on each other with sad face coz we have to return.Gaurangbhai didnt lose hope for sighting and luckily he sighted with Pankaj,he waved his hand to walk fast and we had clicked this beauty for 10minutes.i saw towards Abahy and he was smiling coz it was his desired wish list,he had clicked only 5+ shot coz he just wanna see live and enjoyed it live. 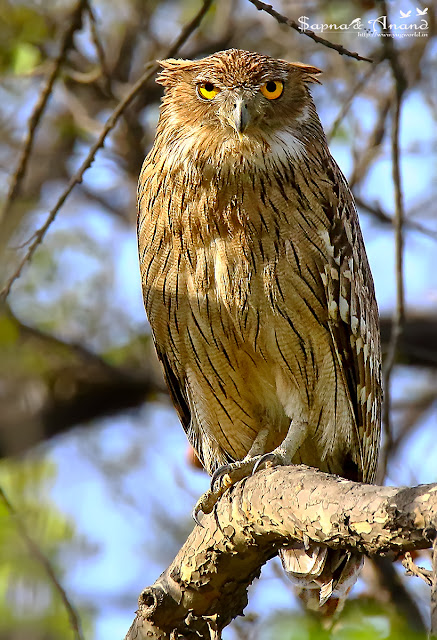