A+ A-
Print Email
As long story posted in Brown Fish Owl , we had clicked it then went to Amber farm, sasan for stay.then we had did 6am to 9am and 3pm to 6pm safari in sasan for 2 consecutive day.all day we sighted lions and birds but we were expecting leopard but bad luck for us.
on 08/05/17 we decided to go early and though we reach there at 6am and started safari at 6.20am.while we entered,faced fog and unable to see beyond 25mtr so thought for bad luck again coz fog was every where.we can see sun clear but looks like a moon.
After drive of 30+min,sudden i asked to our gypsy driver to stop and reverse it very slowly then asked to stop.i told my friends to focus and click a Indian peafowl.it was sitting on a dried and broken tree with spreading of its feather.due to fog and against light,clicked 2 shot in hurry then i took vertical shot.while i go to change the direction of camera,feather went in original position.i thought,i was lucky to frame my dream shot.when i see in my camera's display,it was over exposed but tried hard to recover details.even frame was full of surrounding dried tree branches and distracting whole frame so blurred at some level to looks better.whole procedure took approx 2hour.
here is the result 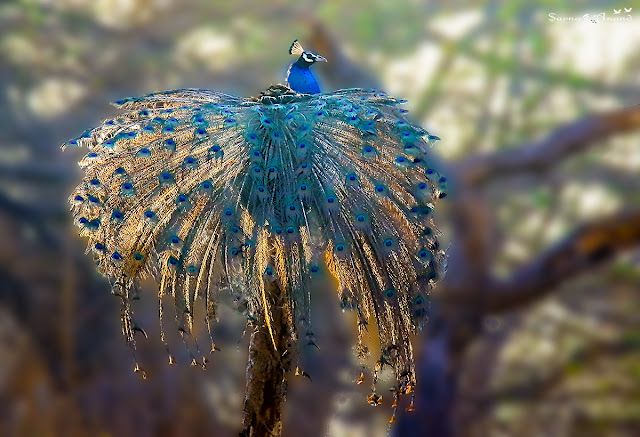