A+ A-
Print Email
Golden Eagle normally sighted in high altitude areas but in 1st week of December'18 it is sighted in Palanpur outskirt, Gujarat and i got news after 3rd day but no space of leave to go there and click this beauty came in Gujarat accidentally or what i don't know.
i thought i have to manage during my night n day off in my duty schedule ...finally talked with my birding buddies for Golden Eagle and all were ready to join me on 24th and 25th December 2018.
i came from hectic night duty in my hospital though i be fresh just in 1.30hour at my home and started driving to pick my friend Viren Desai.it was Sunday, though faced traffic jam ..finally i pick Viren at 9.30am and we were on the way towards Karjan, where my other friends were went yesterday for birding.
Apart from 6 lane highway,some cross road need flyover n work was on so got stuck for 30+min in traffic and delayed for 1hour and finally reached around at 11.45am and picked Pragnesh Patel, Dharmesh Patel and Priyank Patel.now our target was to reach Nal Sarovar around at 3pm to click Saker Falcon and Sociable Lapwing but i set limitation of not over-speed during driving though we reached at 3.30pm.
went for both species and left Nal sarovar arond at 6.30pm to reach Palanpur before 10pm and reached timely. i was in contact of my best birding buddy n best friend Pankaj Maheria and we discussed for when to go and what to see there etc.
Around 5.30am we all wake up and get ready for Lifer.i was hoping of temperature around 8-10 degree Celsius coz Palanpur is just 50+km away from Mount Abu and there was minus 1.5 degree Celsius but luckily saw 12 degree Celsius in the morning.we set location in mobile and towards our destination,after drive of 30min we lost our destination and called Pankaj around at 6.50am and he told to go such location but how to go there coz we didn't see any person and ask for and i was drivng on n on....finally Viren told...DOCTOR STOP and he saw the raod coz Viren was there for Golden Eagle 2days before.
Finally we reached our destination at 7.05am and parked it. i told to see my car's display,it was showing 6 degree Celsius and we felt it mean when we were going to half press shutter button to focus,our finger was like freeze.(we all were came from where minimum temperature goes down upto 12 degree Celsius)
Even though we were looking each vulture and bird to identify our lifer but we failed till 10.30am so i asked Dharmeshbhai to call on one number coz his mobile has network and that number was of guide which was given by our other friend Shailesh Patel.
His name is Mavjibahi,he asked for guide fee and we were agree so he came and we walked here ther for 30 min but we didn't find the eagle.while we were returning at our point where we started searching the eagle,he spotted the eagle.i was just behind him so i clicked one shot for record shot to id it and in between Viren clicked it.after confirmation i raised hand to come fast but before they come,it fly away but didn't see due to tree.
we went that place but failed to locate it even though it was a small area.now we were exhausted n sit on a rock and Mavji asked to come one person with him so viren went with him. after 10min we 3 went at where i clicked this beauty and priyank was there to find it.after 1omin we all meet with small faces.i asked to Mavji that now we were here and if you find then show us, Pragnesh and i went toward my chittah as i was thirsty, Pragnesh told me that if you wanna return then i was ready as i have shot and we have to go Nal Sarovar for 2 more lifers but i told that yes i have record shot but you other person dont so i will not go till you people don't have photos of Golden Eagle.
Around 11.30am Pragnesh told me.."Andy lets we go as we go in past for lifer and searched", so we two went inside the jungle.Pragnesh pick a stick for safety person from Feral dogs. i told him to pick a large one for me coz he has smaller so i pick it and i was walking ahead of his.Pragnesh raised his stick against one Dog as it was starring us and sudden big bird fly just 15ft away from us,we felt big back thrush but didn't see it and thought for Vulture so moved ahead.i asked pragnesh that someone called me like "doctor...doctor..." but we didn't hear it due to alarming call of crow,ibis etc bird and Viren again shouted " doctor...doctor.." we look towards each other smiled and run towards call and it was unforgettable moment when we saw it perching on a clear top of tree.
we clicked more than 100 photos from all angle,mobbed by crow and videos.sharing this beautiful shot. 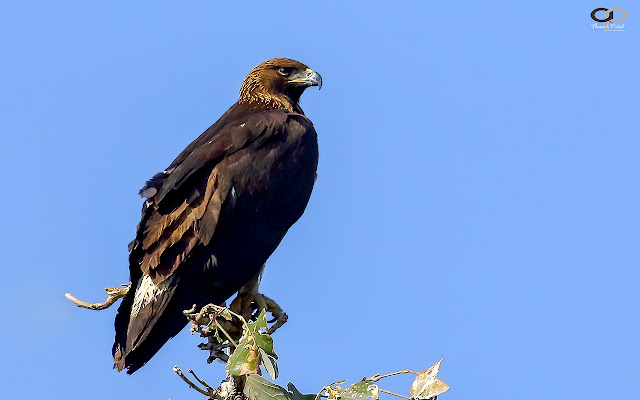