A+ A-
Print Email
Stoliczka's Bushchat was a long awaited bird coz it was clicked by me during my 1st visit of GRK on 14th December 16 but it was just a record shot coz i had clicked after sunset and very difficult to approach closure.Next year again i went there mean on 28th December 2017 and clicked a good close shot and satisfied with it but later i knew that this Stoliczka's Bushchat have unusual pattern of "puff and roll" while they walk on ground,again it came in wishlist.
in 2018 there is less rain in kutch region so many birds will migrate to inner areas of Gujarat and this my thought was told to one of mine best guide Akbarbhai who is from Nal Sarovar,he had sighted this beauty while he was searching a Shot-eared Owl so i made a Plan to frame this beauty along with Little Crake.
Told my Plan to my friends and in the evening of 18th March 2019 we were on the way to Nal Sarovar. we had booked a room at Bavla,it is 1 hr drive from Nal Sarovar.we wake up around 4.45am and get ready till 5.30am and on the way towards Nal Sarovar.reached around at 6.35am and Akbar was waiting for us,1st we went for Little Crake,will write on it later.Around 7.10am Akbar told to go at a place where Stoliczka's Bushchat were sighted coz its puff n roll action been captured in morning and if temperature been raised then we are helpless coz summer is already started and this region after 9am it been temperature goes above 35degree Celsius.
After Drive of 15min we were near to that area but my car was unable to cross a road coz local villager had dig a small area for water for their harvest so parked my cheetah and started walking.Akbar was continuously calling his family member who was that area,i asked him "why are you calling" then he replied "to come with bike and picked all of us".then i told why bike,we can walk.he replied sir it was 4km away and time is important.finally two guy came with two bike andwe reached after 5+min of bike ride.
one of guide show me the beauty displaying "puff n roll", lye down on ground very carefully coz there were dried branches of wild babool and i experienced its spike. i was hypnotized after watching its display of  "puff n roll". clicked so many photos but unable to focus and frame its "puff n roll" coz walk here n there and also during ground level shot there may be obstacles of grass and other things which may hurdling during focus.i had avoided crawl due to pointed spikes, so walked little towards "puff n roll" beauty when it fly away and finally after 15min of efforts,took shots then tried for video.sharing both here,hope You will liked it. 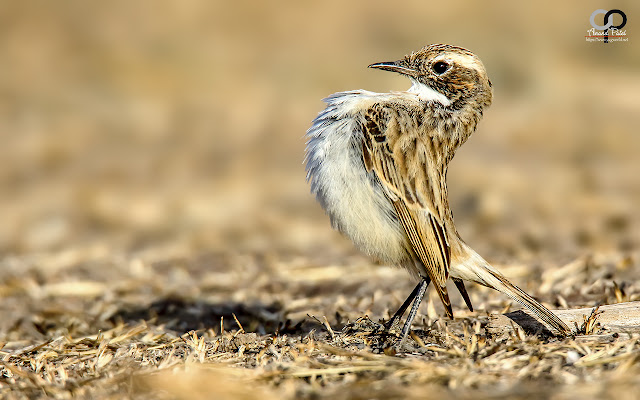