A+ A-
Print Email
Asian Dowitcher is a Resident bird Western to Eastern Siberian steppe regions,  Mongolia and North East China.Migrate to South Asia, south India, Sumatra and North & East Australia during winter.
Gujarat had record of sighting in 8th Feb 2012 by Kunal Joshi
This Rarity again sighted on 31 december 2018 by Rajdeepsinh Jadeja and have a dream to go Jamnagar but no leave option,cudnt manage for it.somehow a manage 3 day with mine off for Little crack on 18th to 19th January 2019 but this program was postponed and trip made for Jamnagar.
So i drive my cheetah to Bardoli around at 9.30am and parked at Viren's House,then we took his Elantra and driven towards Ahmadabad around at 10.30am.
Pankaj was coming from Patan to Ahmedabad and with Vivek Mansata,they will join us but due to some issue Vivekbhai told to left Ahmadabad in evening.now Pankaj was Confused coz i have to left Jamnagar by 19th and he had decided to do birding on 20th so he also came with Vivekbhai in evening.
we were near Bagodra and it was 3.30pm so we have lots time...(will share it in another article)...left Nal Sarovar at 6.30pm.
Reached Jamnagar by 11.30pm and entered in Hotel Presidency,issue begin for booking as Pankaj did online booking for 2 room and showing only 1 room but hats off to owner Mustakbhai who told to his attendant to give room and then ask to do booking online.Mustakbhai told to sit in his cabin till Pankaj and Vivekbhai came so we talked with them till 3am with very tasty tea,in between get a chance to meet Yashodhan Bhatia
Next Day we wake around at 6.30am and went location of Asian Dowitcher around at 7.30am and Kunal Joshi came there to guide us but we didn't sighted this rarity in whole morning session.So we went at other area and then went for a breakfast of favorite little Samosa.around 12pm we went at Lalabhai's shop to buy Pankaj's Nikon D850 and then went to Balachadi with Kunal Joshi for Red Knot.but again bad luck.
Around 3.30pm decided to go at Dowitcher's Site so we were in Pankaj's car.Vivekbhai called Chirag Solanki one of good guide from Jamnagar for sighting of Common Ringed Plover and he told,Dowitcher is sighted come at location,Viveknhai told we were about to reach.
After seeing me and Viren,Chirag aka Chiku, i will not let this two person to click Asian Dowitcher as they didnt told me that we were coming to Jamnagar...and smiled and hug us.We know Chiku when he come to surat and went for Forst Owlet as we know the exact location.Surprisingly we met with Ketan Shah,Dhyey shah and Anup Chavda,we shake hand and sit beside them.
The Rarity was far away and took record shot and waited for 45+min and then it started walking.we had taken so many shots with video and sharing this one,its not a close shot bu loved frame. 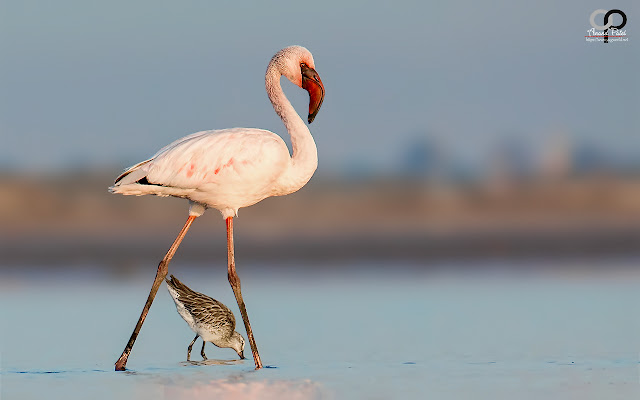